Chick Flick Deconstruction: How To Lose a Guy In 10 Days (Day Three)


"The horse shit continues!" shouts Ben's boss at the dawn of day three. I give Ben's boss five stars.

Welcome back to Ben and Andie's circus of abuse and deception, and we're on to the next act, another one of those things us pesky ladies pull out of our rancid grab bag of adorable torture. Take it away, Andie! What else can I do to drive Mr. Danger and any man before him just absolutely potty? 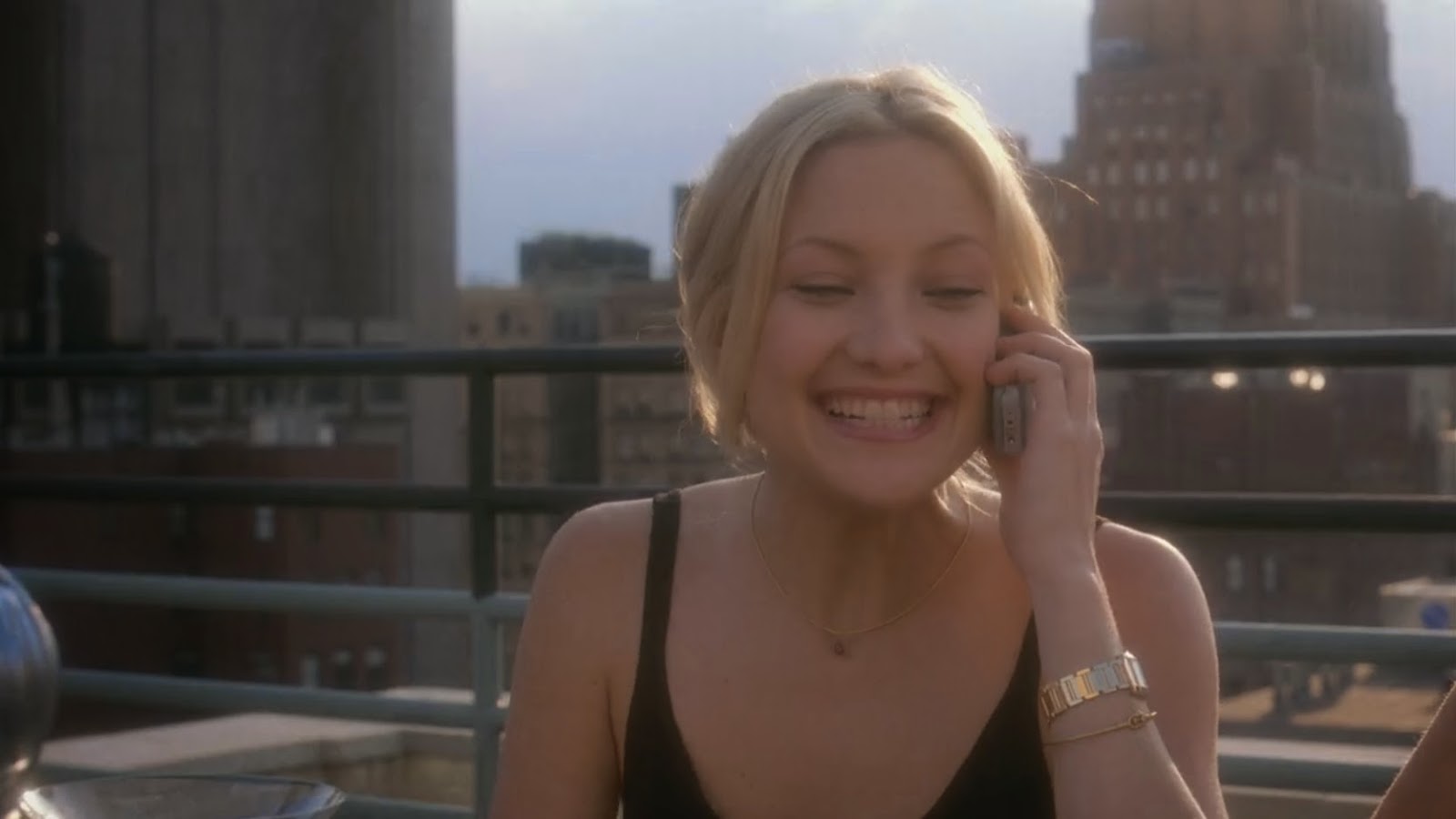 You know how it is, ladies. Your man, that beast of a creature that farts in your couch and is adorably baffled at tampons, well, he's quite a catch. But how do you know he's really Teh 1? Clearly you owe it to yourself and the relationship to goad other men into beating him. How else will you know?

Andie calls Ben at work like a chump. What a terrible person she is.

"It's meeeeeee!" she squeals, and if you're going to admire Ben for anything, it would have to be the fact that he doesn't immediately chuck his phone out the window in pure fight-or-flight panic. "I miss you Benny-boo. Boo-boo-boo."

Andie calls to set up a date, girlfriends giggling and cackling in the background, and she gets to pick the movie. Raise your hand if you know where this is going.

I know this is a feminist deconstruction. While this movie fails on a couple of technical levels, that's not what I'm in the business of pointing out. But this is a comedy, and comedies are frighteningly complex in their simplicity. Set-up + payoff = joke. I'll be the first to admit that this is way harder than it sounds. But even the worst of comedies understand you can't deviate from this simple equation too much. If you want laughter, you need to introduce an element of familiarity, then either go balls out with it until it's twisted and grotesque, or pull the rug out from under it.

Here, the setup is that they're going on a movie date and Andie gets to pick the movie. The payoff? 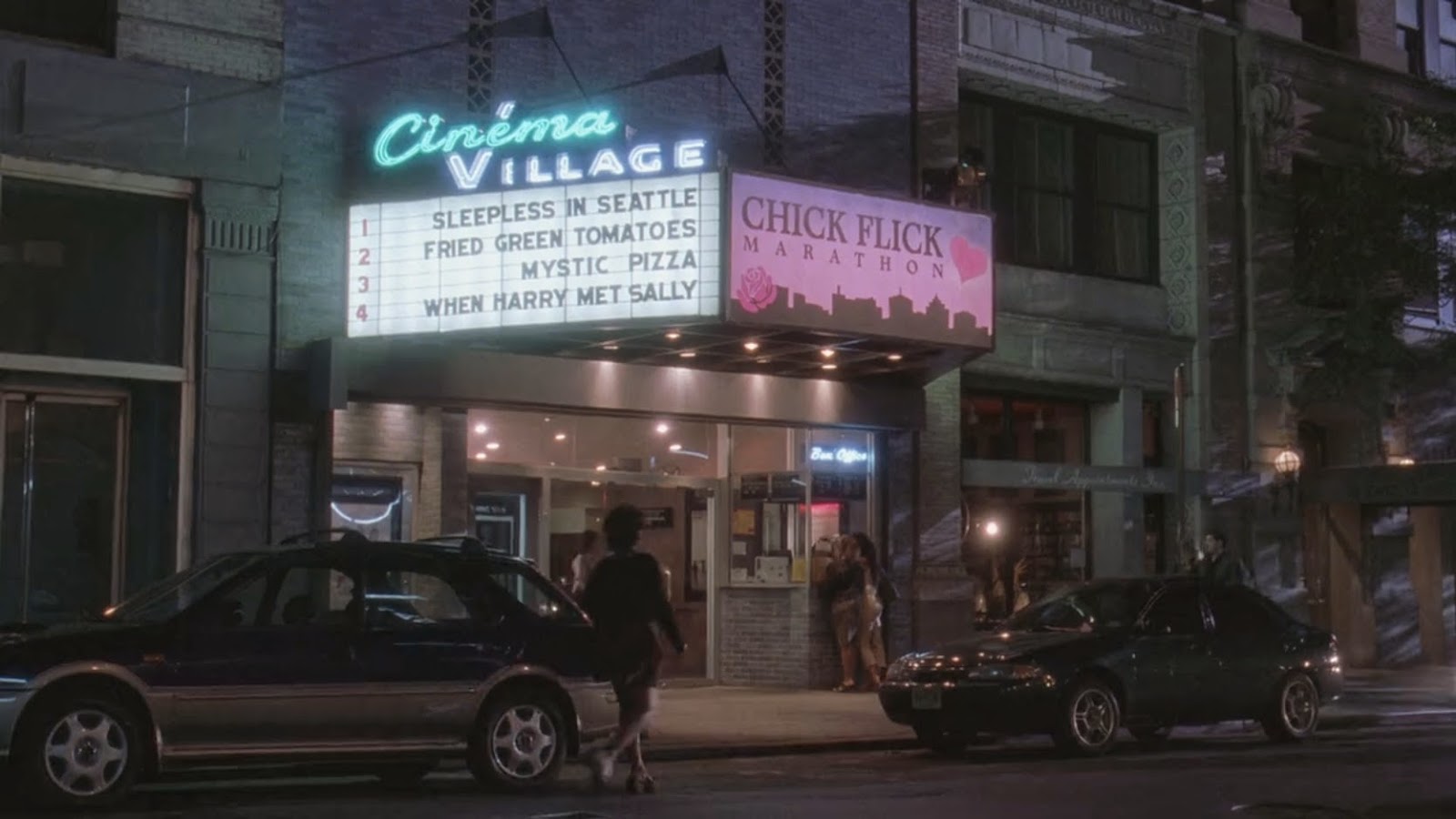 This is why I can't cut the movie any slack. It fails as a comedy, sure, but it fails in a very specific and awful way, namely in that it has only one joke: women are awful, and even when they're not, the things they like are awful.

Yes, this is sexist and insulting, but I want to unpack why it is those things, because there's a lot of layers here.

On the surface, of course it plays into the Monolith Model of cis-female human existence (cis-female exclusively, because obviously no other female people exist.) Men are people. They come in all sorts of wonderful shapes and sizes. Women are women. They like chick flicks and shoes and things that sparkle. If I have to explain why that is reductive, I can't imagine you're enjoying this blog very much.

But this goes deeper. Again, I have to bang on about one very important thing, which is the premise of this entire movie. In case you forgot, here's Andie's mission statement, pulled straight from this movie's rancid ass:


[Michelle] has a problem hanging onto relationships, and doesn't really know what she's doing wrong, which is like a lot of our readers. So, l was thinking that l could start by dating a guy, and then drive him away, but only using the classic mistakes most women make all the time.


All the goddamn time with these women. I've already discussed Andie being misogynist, but I did it without much context. By now, I hope I've provided enough examples to shore up that assertion somewhat. This is what Andie thinks all women except for her are like: horrible people. If the premise had been that she was just going to be generically horrible, no gender or sex involved, I wouldn't have nearly as much of a problem with this. But if that had been the premise, this movie would not have been made.

So Andie, the writer proxy, buys into the narrative that women are less than normal, and it must therefor follow that everything they like is silly and inconsequential and vapid as a result. Her magazine is stupid. Chick flicks are stupid. Owning little dogs is stupid (but more on that later.) The movie never tries to poke fun at the reason we see these things as stupid, it never attempts to extract humor from the fact that Andie is bafflingly, boneheadedly wrong about what constitutes common relationship mistakes. It just takes these things as a given and tries to draw laughs from that. It's like trying to balance a bear on a knitting needle. It's just never going to work, and nobody is going to walk away happy.

Also, holy shit, has this movie gone meta on me? Has it become self-aware? Is this romcom actively mocking me for watching it?

It is! Andie is being awful = she takes Ben to chick flicks, which are awful = I am watching a chick flick = this movie and it's protagonist agree that I am awful.

I do not get this.

Again, I think we're just supposed to chuckle and agree. "Oh my, yes, we are awful in every possible way."

During the movie, Andie won't shut up. She pretends she wants to talk about feelings and shit in a crowded theater. This is exactly why you can't watch a movie in peace these days. Aren't you sick of straining to hear the sound of Nick Fury motherfucking it up over the sound of all these chattering women going on about their goddamn feelings? I know I am.

First, Andie tries to pick a fight with Ben (who is actually enjoying the movie? What gender-bending fuckery is this?) by implying he's thinking of another girl, or finds the actress attractive, all those normal little things women like you and me bitch about 24/7. Man, it's almost like Andie's character is written by hardcore misogynists.

Predictably, the guy in the row behind them isn't pleased with this. Here we come back to the movie's single, solitary, lonely and probably very sad little joke: men and women are different! This guy is all by himself at a chick flick marathon! That is a joke we laugh at! Haha, we go! Men liking movies for women! That's just silly, you sily-billy movie!

This guy is clearly annoyed and upset, so Andie decides to pick a fight with him. I can only guess at how this is "a classic mistakes most women make all the time," but no time to think about that, because things are about to escalate! Quickly! 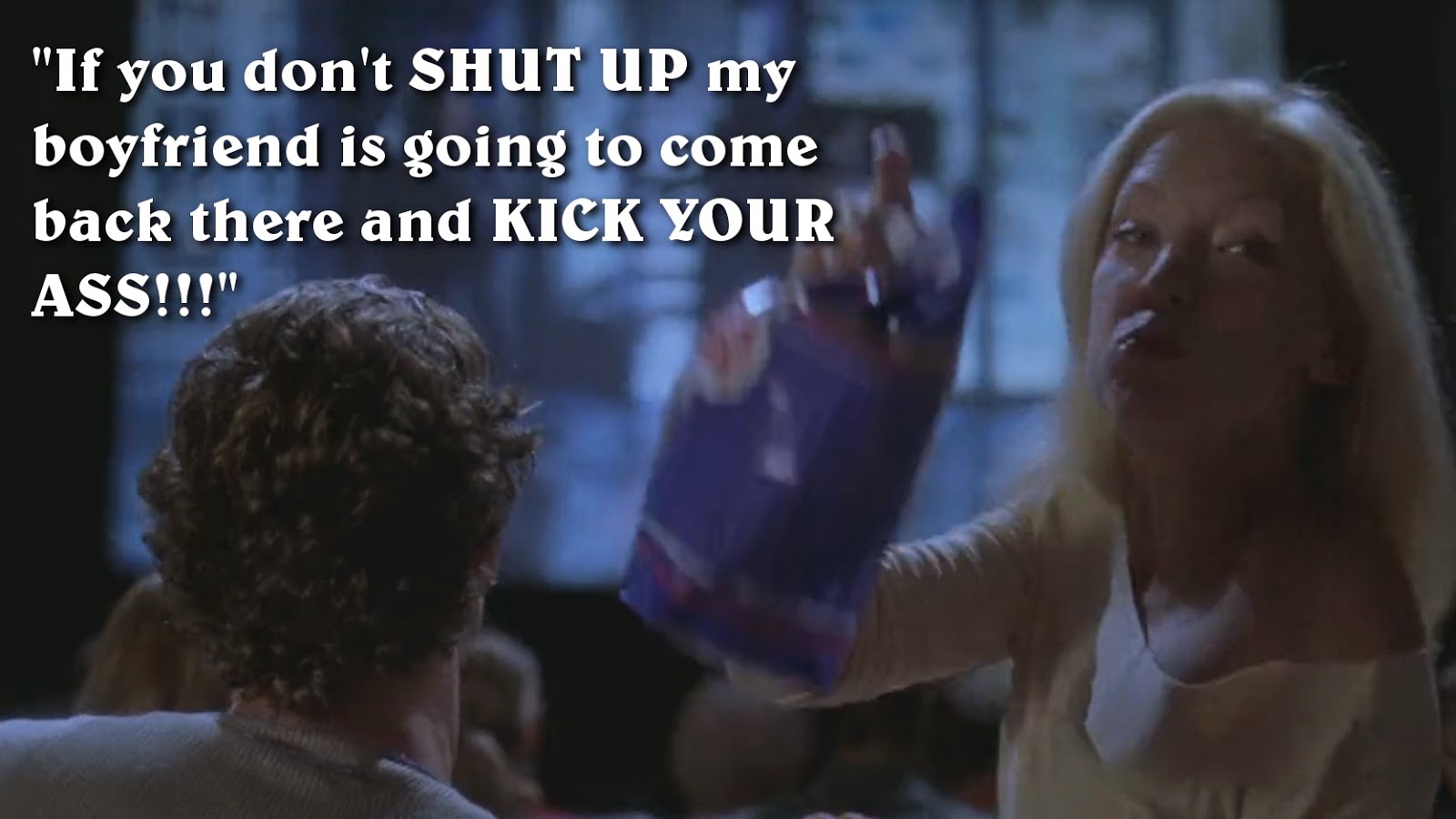 Haha! Oh movie, you totally have my number! As a woman I relish and delight in psychical altercations, because they never ever turn out bad for me!

Things are taken out into the lobby, where Ben argues with the man that he "can talk like that to me, we can work it out, but not to a lady."

"White Knighting" is a term that gets bandied around a lot these days, but this is pretty much it. "This breasted creature is all weak in the vagina and irrational with uteral drift, please forgive her hysteria, she does not know what she has wrought. Now let's shake hands like gentlemen."

It does not work out like that. Ben gets punched in the face (HAH!) and the guy returns to watch his movie. Up until this point, by the way, he's done nothing confrontational or even rude. He just pointed out that Andie's chattering and moving about was ruining the movie for him. Sure, he shouldn't have punched Ben for that. That's not even a little bit okay. But I do want to point out that Ben's insistence that the guy owes Andie an apology is some bullshit.

So Ben gets punched out, stumbles into Andie, and they both end up on the floor. What would you do if you were Ben? Tell Andie she's gone too far? That it's downright nasty of her to put you in a position like that? Something something break up? No. You are wrong. I can't even hear what you said, because I'm not in the room with you, but I know what you said is wrong. Because I know you didn't say "shove my head in her cleavage and sniff her breasts." 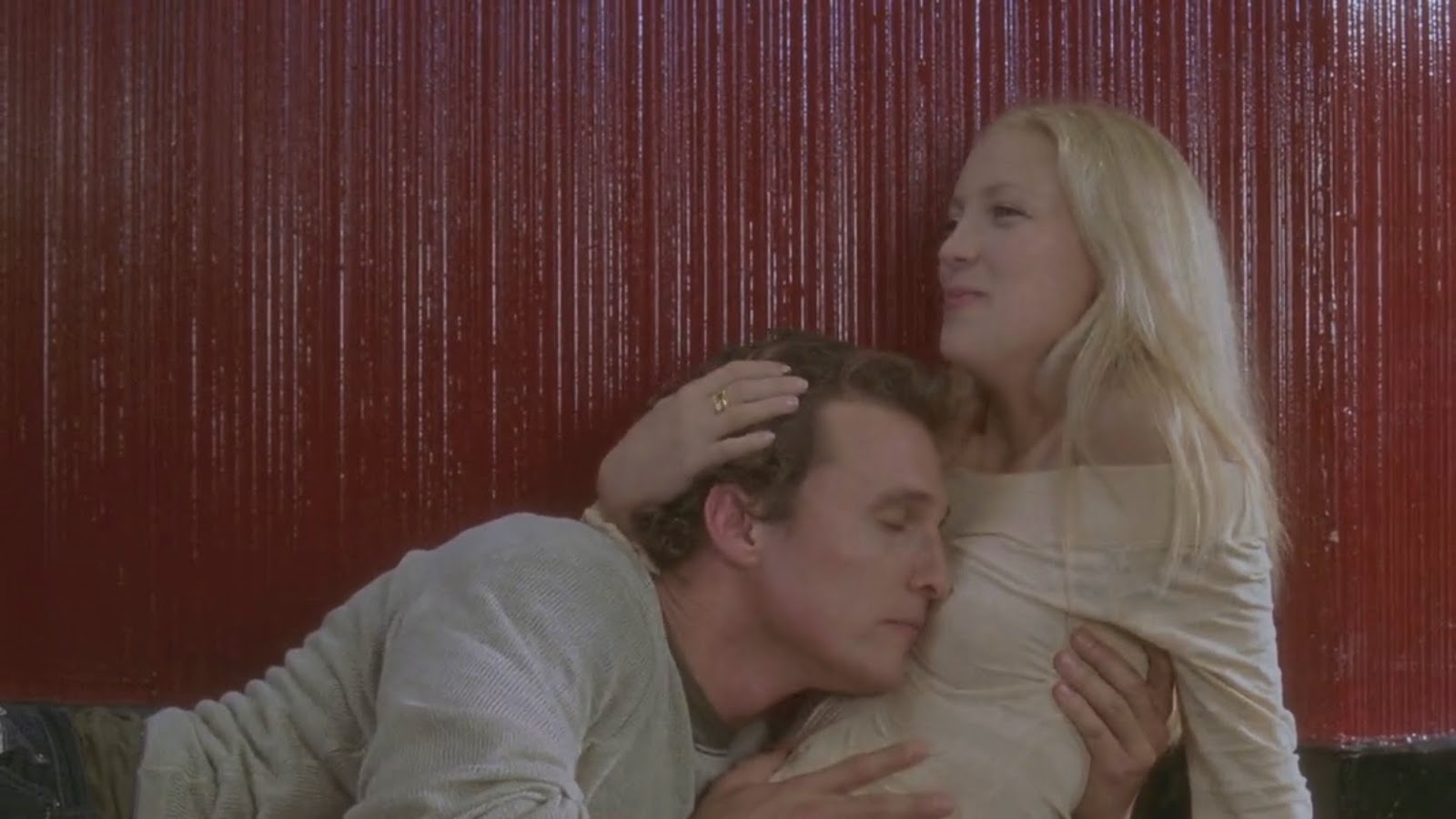 I can only imagine this was an acting decision on McConaughey's part. Because what the hell else could this be? There he is, crew gathered around, laying on the floor right on top of Kate Hudson. May as well... sniff her tits? Yeah. He kind of strikes me like that kind of guy. Hey, director, maybe we need another take? One where he's not motorboating the leading lady for no goddamn reason? No? We're going with this one? Okay.

I can't top this. I cannot for the life of me think of anything to say after "and then Ben sniffs Andie's tits like she's got cocaine nipples." Here's some Pokemon dancing around a giant clitoris.